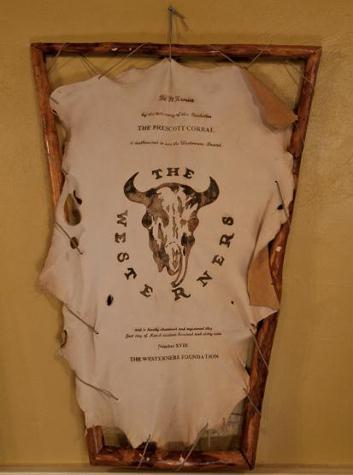 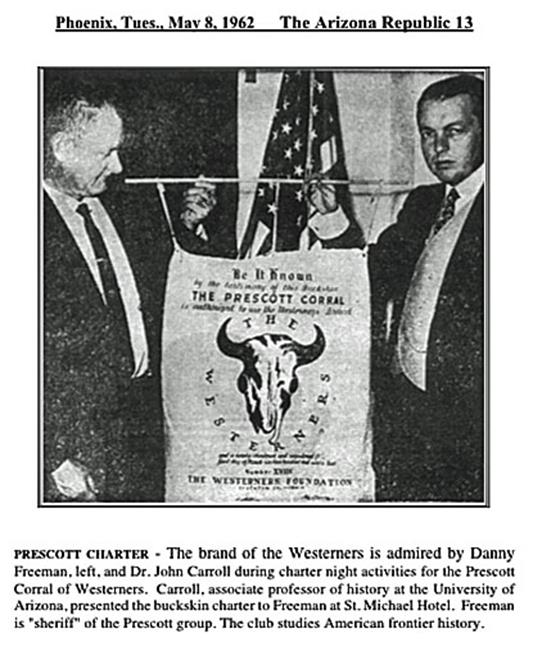 Founding of the Prescott Corral

Dr. Charles Franklin Parker, minister of the Prescott First Congregational Church and founding president of Prescott College, invited ten men for a Dutch treat dinner at the Hassayampa Hotel on November 10, 1961. In attendance were Walt Coburn, J.D. Freeman, Matt Culley, Phil Rockfellow, Harold Koechling, Budge Ruffner, Gail Gardner, Charles Greene, Chick Orme and Parker.  Charles U. Pickrell, former Director of the Arizona Extension Service, was invited as the principal speaker. He talked about the activities of the Tucson Corral, where he was Sheriff, and gave a brief history of Westerners, who they were and what were their objectives.After discussion it was decided that the Prescott group would operate as a Westerners Corral on a temporary basis for four months. Danny Freeman was made Temporary Sheriff and Harold Koechling Secretary-Treasurer. Before the conclusion of the trial period the group decided to set up a permanent organization. Danny Freeman continued as Sheriff, Gail Gardner was Deputy Sheriff Harold Koechling Keeper of the Chips and Budge Ruffner, Trail Boss.The Keeper of the Chips was authorized to send $25.00 to Westerners Foundation, Stockton, California, to purchase an official Westerners Buckskin Charter. This Charter, Number 18, is dated March 1, 1962. It was attached to an old single-tree donated by charter member Frank Armer owner of the Spider Ranch near Fair Oaks.

Charter night was held in the Crystal Ball Room of the St. Michael Hotel on the evening of May 4, 1962. Ladies were invited and the total attendance was about 75. The Charter was presented by Dr. John A. Carroll, associate professor of history, University of Arizona, and Sheriff of the Tucson Corral. He was the featured speaker of the evening and spoke on “The Inevitability of the Little Big Horn.”  During the meeting Dr. Carroll made the presentation of our original “Old Joe” buckskin charter. Our charter has continued to have a prominent place of honor at all meetings of our corral except for two periods when it went missing, but more of that later. 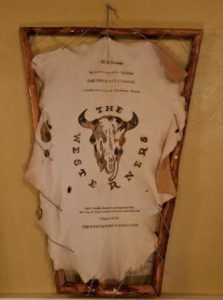 A decade or so later it was noticed that the Charter buckskin banner had gone missing, probably stolen, no one knows when, nor by whom. Sheriff Kenneth Calhoun ordered a replacement, but somehow Westerners International sent the wrong number and date for the replacement. Doctor Calhoun and Danny Freeman got together and made a new banner with the correct number and date. The new buckskin banner was from a springbok, an African gazelle. It is lightweight, accurate and beautiful. Ken adorned it with his own feathers, bear claws and Indian arrowheads, and it was officially unveiled at the 20th Anniversary ceremony on May 7, 1982. In 2001 Jay Cothrell reworked and repaired the framing of the Charter that had been damaged at the Fain Park “Outing”.

The replacement banner lasted for 22 years. At the end of 2004, as we were preparing to change locations for our monthly meetings, the “host” at the old location could not locate the banner. After a fruitless search we had to concede that it was irretrievably gone and a replacement should be obtained. A group of past and future Corral Sheriffs—led by Fred Veil and Jay Cothrell—took up the challenge and a replacement was soon on display at our meetings.

The first Bylaws were approved and adopted on April 7, 1962. They stated: The Prescott Corral of Westerners is organized as a non-profit, nonpartisan, independent group of people interested in the study and perpetuation of all phases of the lore, traditions, culture, history and development of the great American West, the dissemination of which shall be accomplished through monthly meetings. The purpose of the Prescott Corral shall be dedicated to preserving permanently historical subjects of the West which otherwise might be lost to posterity. Other parts of the Bylaws mentioned that the membership shall be limited to 36 men and that vacancies shall be filled by majority vote, by secret ballot of the members present. The purpose of limiting membership was to give all an opportunity to research historical subjects and present the findings at the meetings each month. It was felt that each member should make a report on a selected subject about every two or three years. The idea and intentions were good but things did not work out exactly as hoped for.
Over time the bylaws were changed to increase the membership and on December 5, 1965, they were amended to read: “Membership shall not be limited as to number nor because of the sex of the prospective member.” Later, Gail Gardner made this comment, “Letting women in was the greatest thing that ever happened. After that our membership and attendance began to grow substantially.”

Through the years the total membership has fluctuated from the 36 Charter Members to a maximum of 303 in 1976. Our current membership is around 210. In March 1993 it was realized that there was no provision for Life Members in the Bylaws so this stipulation was added. In 1998 a further amendment was added allowing appointed members of the Posse a vote in Posse matters.

Past Sheriffs of Prescott Corral

The Prescott Corral has long been both one of the largest and most recognized of WI local groups with a growing list of awards from the parent organization.

The Co-Founders Heads-Up award was inaugurated by Westerners International in 1970 and is presented to the Corral that has the most outstanding activities that enhance historic awareness of its community and furthers the purpose of Westerners with the most innovative and interesting programs.

Prescott Corral has won this most prestigious of WI awards on many occasions. The list of award winning years and the names of that year’s Sheriff follow:

The Philip A. Danielson Award for the best paper presented at a WI Corral award winners are:

Corral Members recognized in the “Coke” Wood competition for published short articles or monographs are:

Other WI recognitions for our corral members:

Both Bill Bork and Bruce Fee have been recognized as “Living Legends” in the WI publication the Buckskin Bulletin for their contributions to the preservation of Western History.